Here is a little excerpt from “The Porsche Book” on the Carrera 3.0 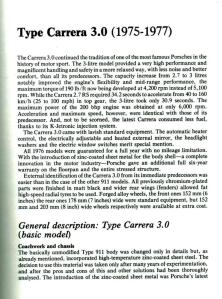 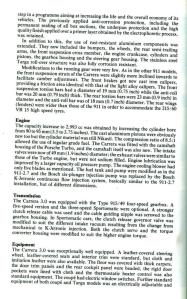 The Carrera 3.0 continued the tradition of one of the most famous Porsches in the history of motor sport. The 3-litre model provided a very high performance and magnificent handling and safety in a more relaxed way, with less noise and better comfort, than all its predecessors. The capacity increase from 2.7 to 3 litres notably improved the engine’s flexibility and mid-range performance, the maximum torque of 190 lb/ft now being developed at 4,200 rpm instead of 5,100 rpm. While the Carrera 2.7 RS required 34.2 seconds to accelerate from 40 to 160 km/h (25 to 100 mph) in top gear, the 3-litre took only 30.9 seconds. The maximum power of the 200 bhp engine was obtained at only 6,000 rpm. Acceleration and maximum speed, however, were identical with those of its predecessor. And, not to be scorned, the latest Carrera consumed less fuel, thanks to its K-Jetronic injection system.

The Carrera 3.0 came with lavish standard equipment. The automatic heater control, the electrically adjustable and heated external mirror, the headlight washers and the electric window switches merit special mention. All 1976 models were guaranteed for a full year with no mileage limitation. With the introduction of zinc-coated sheet metal for the body shell—a complete innovation in the motor industry—Porsche gave an additional full six-year warranty on the floorpan and the entire stressed structure. External identification of the Can-era 3.0 from its immediate predecessors was easier than in the case of the other 911 models. All previously chromium-plated parts were finished in matt black and wider rear wings (fenders) allowed fat high-speed radial tyres to be used. Forged alloy wheels, the front ones 152 mm (6 inches) the rear ones 178 mm (7 inches) wide were standard equipment, but 152 min and 203 mm (8 inch) wide wheels respectively were available at extra cost.

Coachwork and chassis
The basically unmodified Type 911 body was changed only in details but, as already mentioned, incorporated high-temperature zinc-coated sheet steel. The decision to use this material was taken only after many years of experimentation, and after the pros and cons of this and other solutions had been thoroughly analysed. The introduction of the zinc-coated sheet metal was Porsche’s latest step in a programme aiming at increasing the life and the overall economy of its vehicles. The previously applied anti-corrosion protection, including the permanent sealing of all box sections. the underpan protection and the high quality finish applied over a primer layer obtained by the electrophoretic process, was retained. In addition to this, the use of rust-resistant aluminium components was extended. They now included the bumpers, the wheels, the rear semi-trailing arms, the front suspension cross member, the engine crankcase, cylinders and pistons. the gearbox housing and the steering gear housing. The stainless steel Targa roll-over structure was also fully corrosion resistant. Modifications to the running gear were very few. As in the other 911 models, the front suspension struts of the Carrera were slightly more inclined inwards to facilitate camber adjustment. The front brakes got new cast iron calipers, providing a friction area identical with that of the light alloy calipers. The front suspension torsion bars had a diameter of 19 mm (0.75 inch) while the anti-roll bar was 20 mm (0.79 inch) thick. The rear torsion bars were 23 mm (0.9 inch) in diameter and the anti-roll bar was of 18 mm (0.7 inch) diameter. The rear wings (fenders) were wider than those of the 911 in order to accommodate the 215/60 VR 15 high speed tyres.

Engine
The capacity increase to 2.993 cc was obtained by increasing the cylinder bore from 90 to 95 mm (3.5 to 3.75 inches). The cast aluminium pistons were obviously new too but the cylinder material was still Nikasil. The compression ratio of 8.5:1 allowed the use of regular grade fuel. The Carrera was fitted with the camshaft housing of the Porsche Turbo, and the camshaft itself was also new. The intake valves were now of 49 mm(1.9 inches) diameter: the exhaust valves were similar to those of the Turbo engine, but were not sodium filled. Engine lubrication was improved by a larger capacity oil pressure pump. The engine cooling blower had only five blades as mentioned. The fuel tank and pump were modified as in the 911-2.7 and the Bosch six-plunger injection pump was replaced by the Bosch K-Jetronic continuous flow injection system, basically similar to the 911-2.7 installation, but of different dimensions.

Transmission
The Carrera 3.0 was equipped with the Type 915/49 four-speed gearbox. A five-speed version and the three-speed Sportomatic were optional. A stronger clutch release cable was used and the cable guiding nipple was screwed to the gearbox housing. In Sportomatic cars, the clutch release governor valve was modified to suit the different intake vacuum resulting from the change from mechanical to K-Jetronic injection. Both the clutch servo and the torque converter housing were modified to suit the higher engine torque.

Equipment
The Carrera 3.0 was exceptionally well equipped. A leather-covered steering wheel, leather-covered seats and interior trim were standard, but cloth and imitation leather were also available. The floor was covered with thick carpets, the door trim panels and the rear cockpit panel were beaded, the rigid door pockets were lined with cloth and the thermostatic heater control was also standard equipment. The coupe had electric window switches. Further standard equipment of both coupe and Targa models was an electrically adjustable and